An external GPU under Mac OS X : three screens on a MacBook Pro

An external graphic card on a Mac? Some dream of. Others do. An American company has indeed boxes that can contain an ExpressCard card or any PCI-Express card.
En français.

Proud owner of a box of this type, I will test it, obviously with an Mac OS X orientation. 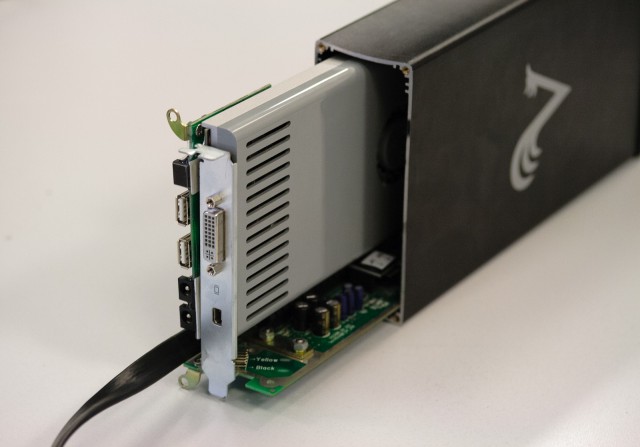 In theory, it should work putting a compatible graphic card on Mac OS X.

It is not as simple in reality. First of all, the support depends strongly on the model. I tested it on a 17 inch 2009 MacBook Pro (MacBookPro5,2) and it works partially: the GPU can not be removed while on or plugged. Clearly, I needed to connect the card with the computer turned off. It also prevents reboots (as it must be off) and standby.

Secondly, you need a compatible graphic card. I have a ViDock 3 (power of only 75 W) and so I had to choose a mid-range card. The easiest way on Mac is to use a Mac Pro card, like the Radeon HD 2600 XT or the GeForce GT120. It is easy to find, it does not consume too much and it is silent. I tested both models and I use the GeForce GT120 everyday.

Then you have to play the “hackintosh” for it to work : I had to install ATY_init , a tool that actually inject the “BIOS” of the card in the Mac OS X drivers. No need for other hacks, just install the. Kext. The card is also not recognized as a GeForce GT120 but as a GeForce 9500 GT. Good news, both outputs work well.

Little trick : you must modify a jumper on the box to boot. By default, the card starts at the same time as the Mac EFI and do not like it. With the jumper, you can add a delay so that the card starts after the Mac , but early enough that Mac OS X does not crash.

Theoretically, it should work with any Mac OS X compatible card (basically what happens on a Mac Pro). You just need a box with a suitable power supply, a ViDock 4 or 4 +.

This is not a gamer solution. With about 200 MB/s measured, it is below what is necessary to simply display an image 1 280 x 1 024 at 60 frames/s. The PCI-Express really limits performances. In my case, it is perfectly suitable for the office work or for video decoded by the GPU (via QuickTime). But on the other sire, videos via VLC or Flash (and what does not properly use the GPU for decoding in general) are choppy in full screen.

In my case, working with three screens instead of one compensates defects.

For amateurs, a 2011 MacBook Pro should be faster because its ExpressCard slot is PCI-Express 2.0 (500MB/s), and a Thunderbolt version should be even more effective with its 4 lines PCI-Express 1.0 (1 GB/s).

If you have any questions, a more complete record on the technical aspect is available on Tom’s Hardware.

Last thing, it is also possible to connect something else than an external GPU. A SATA card, a USB 3.0 card (you will obviously need drivers), and all the standard PCI-Express cards work perfectly in the box. I tested an old PCI-Express x1 SATA (JMicron) and it works : both SATA ports are recognized. Performances are average – the bus puts some limits – but it is usable. Similarly, a USB 3.0 works with adaptated drivers…