A monochrome CRT display on a modern Mac

I had mentioned my monochrome display (a 12 inches from the Macintosh LC era) a while ago, but had failed to make it work with a modern Mac. Quite regularly, I tried to figure it out, and I tried various adapters, before – finally – realising where the problem was and making myself the necessary adapter.

In my previous post, I thought the display needed an output with Sync On Green, but it’s more complicated than that. Apple’s display is asking for composite sync. Let me explain. 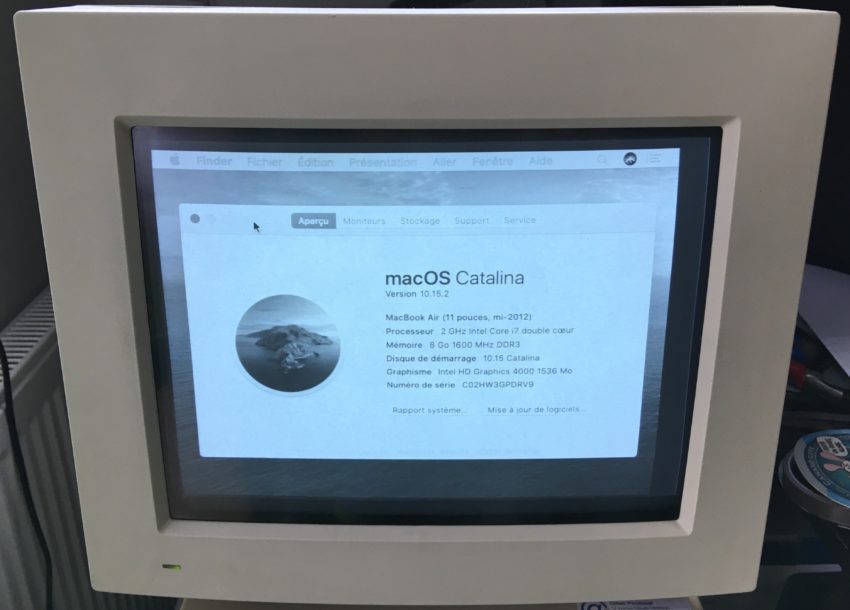 To put it simply, a CTR display requires two synchronization signals: the first value for the vertical part, the second for the horizontal part. The signal transmission varies depending on the monitor, but in VGA – the PC standard, which appeared in 1987 – the signals are separated. Therefore, there is a pin that transmits the vertical sync, and a second one that transmits the horizontal sync. Then, on some displays (in particular those of Sun or SGI computers, but also with some Apple computers such as the Macintosh IIsi), there is the Sync On Green technique. In this case, the two signals are combined and transmitted to the green pin. Sync On Green poses two issues, depending on what you want to do. First, the computer sends a signal of this type (SGI, Mac II, etc.), you need a display that adapts this signal. It is not generalized, but you can find one even in LCD (I have a Dell U2410 for that). Secondly, the display that only accepts Sync On Green (rare). In this case, you need a computer that sends the signal (even rarer) or an adapter that generates it. But let’s come back to my Apple display: it doesn’t use separate sync or Sync On Green, but Composite Sync. With this technique, the two signals are combined, but on a dedicated pin. The problem is that the VGA does not support this technique.

In practice, it works on Macs equipped with a DB15 output (before the Power Mac G3 Blue), and for a good reason: the socket offers one pin for composite sync, and two pins for separate sync. In most cases, the Mac therefore generates the signal, and the display works. Moreover, to complicate things, devices with an analog video output can also offer two other possibilities: synchronization on composite and synchronization on luma, but let’s put it aside.

My problem being identified, how do I solve it? This is not obvious. I first looked for an adapter capable of generating composite sync, but it’s overpriced, without any certainty that it would work. I have tried adapters for Mac which can a priori generate the different syncs, but without success because they do it the other way round: they use a DB15 signal (the Apple socket, which usually transmits a composite sync) to generate a VGA signal (HD15) with separate synchronization. The various options are therefore mainly used with monitors equipped with a VGA input. 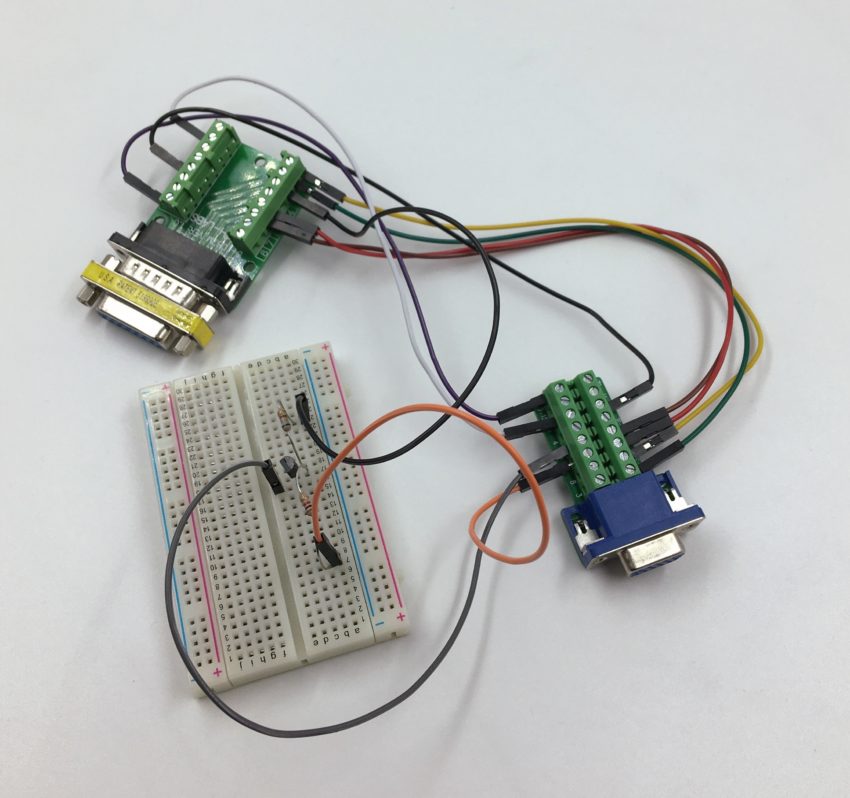 Finally, I found a solution: a small, simple assembly (a transistor worth a few cents, two resistors) to combine “manually” the two signals. In practice, it is necessary to combine the two synchronization signals which come from the VGA output, and connect the green video signals as well as the various grounds. Why the green one? Because Apple’s display receives its monochrome signal on this pin. From a modern computer, it will therefore display in shades of green in reality, but this is not really a problem. In some cases, it will also be necessary to connect the red signal, which is sometimes used to detect a monitor (or to put a resistance). Without this little trick, the computer may not detect the presence of the monitor. So I had to grab a VGA breakout and a DB15 (with an adapter to reverse the pins), as well as components I had in a box, which was significantly less than the over $ 200 demanded in some cases.

Now for the second problem, because otherwise it would be too simple. Well, actually, I fixed it before, but it makes more sense to put it after. Modern displays, when they still have VGA, are “Multi Sync”, which means they can operate with different horizontal and vertical frequencies. Clearly, we can work with a high definition at 60 Hz, but also with a low definition. Back in the days of my display, it was different: it used fixed frequencies and could only display a single definition (640 x 480) with a single refresh rate (66.67 Hz, the standard with Macs). To complicate matters, there are displays with a fixed frequency (often horizontal) and a variable vertical frequency, but that is not the point. In practice, the fixed frequencies and the atypical refresh rate mean that a Mac cannot display an image by default, because macOS simply does not offer the 66.67 Hz option. The solution? Stéphane Madrau’s excellent SwitchResX. It will allow you to create the necessary settings for the display to accept displaying an image. I put the parameters in the capture, these are the standard values that can also be used to capture the output of a Mac.

Now that the display is receiving sync and a signal, is it working? Yes. The image is clean, contrasted, and well framed, which seems a bit surprising considering the age of the display. Still, that makes sense, at least for the geometry: a fixed frequency monitor can be set at the factory settings as the definition will never change. The sharpness is quite good, and the fact that we are confronted to a green display in reality does not really pose a problem. Obviously, macOS is difficult to display on a 640 x 480 monitor and it is obviously not usable on a daily basis, but for watching black & white movies (like the excellent Black & Chrome edition of Mad Max: Fury Road), it’s quite nice. 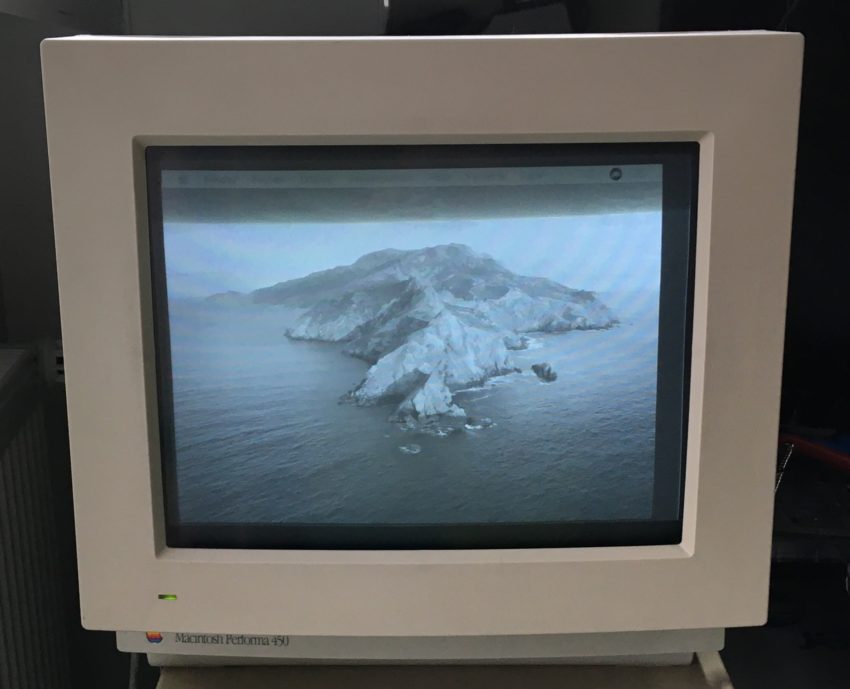 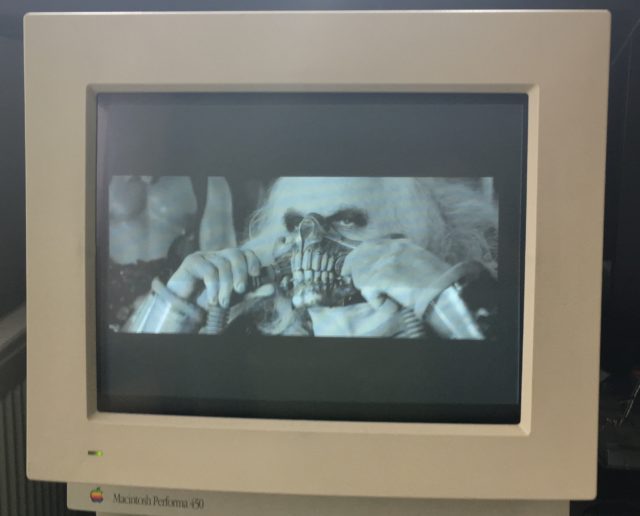 Last point, my photos and videos. We can see the scanning very well, and this is mainly linked to the fact that the display uses an atypical refresh rate (66.67 Hz). So it’s a bit complicated to sync video or even a camera to avoid scanning. It is possible, and some cameras even offer to manually set a value to avoid this, but with an iPhone or a basic camera like mine, this is (much) less obvious. To really finish, I suppose that it must be possible to integrate the assembly directly into a small adapter with switches, but I did not find any.