I would not allow myself to think that Apple uses planned obsolescence , although I recently titled a big troll on the subject, but the fact is that iOS 6.0 make the iPhone 3G – released in 2008 – outdated , and in the worst way in my opinion. And everyone does not want to buy an iPhone 5S.

Let’s see: the iPhone 3G uses an old hardware platform (the same as the first iPhone), with an outdated processor (ARM11), a low frequency (400 MHz) and an obsolete GPU (PowerVR MBX only supports OpenGL ES 1.1). Technically, it is out of date, whatever one may think of the fast changing market.

This model therefore works last on iOS 4.2, and Apple’s latest SDK no longer supports this version of the OS. As a matter of fact, the SDK does not propose anymore to compile the processor instruction set (ARMv6) and is limited to ARMv7 , the CPU instruction set of the following models .

It means one thing: a developer who wants to move to iOS 6 and support the iPhone 5 must de facto drop the iPhone 3G support. It’s pretty harsh, but either it is a good way to force developers to use the latest API and take advantage of the hardware.

Considering how iOS runs , it mostly means that updates of applications will break compatibility with the iPhone 3G without necessarily informing the user. If some developers clearly indicate what the update does, sometimes you get this : 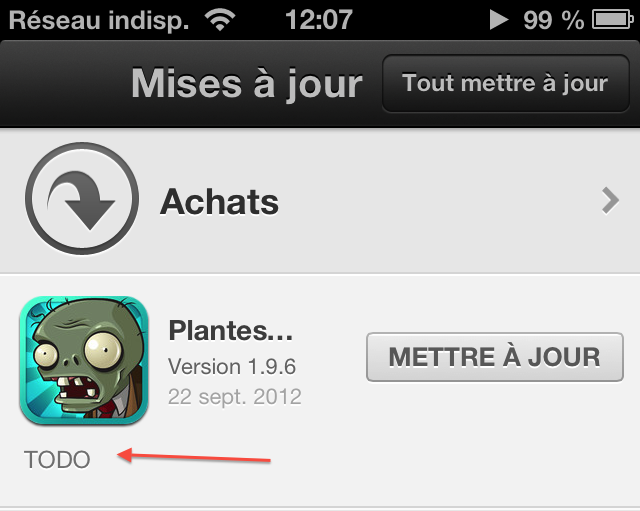 And even , it is not obvious to a casual user to realize that the iOS 6 compatibility breaks the iPhone 3G compatibility.

I must admit that the number of active iPhone 3G is low and that many apps are already unusable , but it’s still quite a rough way to act. Blocking the updates would be a simple solution, which would limit problems.

But no, the update is performed . And make the interest of the phone lower and lower. The iPhone 3G does not become unusable – in reality , iOS has already done that … – It is not to be thrown away, but losing much of your apps is still a concern …

What do you think about that ?