Then type a command to identify the disks to be integrated in the Fusion Drive.

Each disc has a number, all you have to do is to identify them (in my case, disk4 and disk5).

We will now create a Core Storage set using both devices. Test1 is the name of the set, disk4 and disk5 the peripherals to integrate. Beware, it erases everything.

Enter a command that will give you the general UUID.

You must retrieve the following value : Logical Volume Group (for example 44A4-7FD3-6EA17FB6-A89F-10D24C3D0386). We will then create the volume using this login GUID. jhfs + indicates that you are working with journaled HFS +, FusionDrive is the name of the volume and 100% the capacity. For the latter, I took (about) the capacity of both devices added.

Once this is done, the Fusion Drive is functional.

After some tests, it is perfectly bootable externaly on a MacBook Air.

For the copy, it is done in the background, with a priori about 10 minutes without access. In my case, I filled the volume (about 300 GB of data), since OS X first uses the SSD. Then I cloned my system directly on the volume (that is to say on the hard disk) and restarted it. I left it index the hard disk data, and OS X did its job.

The system has been copied in part on the SSD, and some of the data initially copied on the SSD have been moved to the hard disk.

When we look at the use of the devices with iStat Menu, you can perfectly see the copy between two devices : iStat gives the use by device and not by volume. 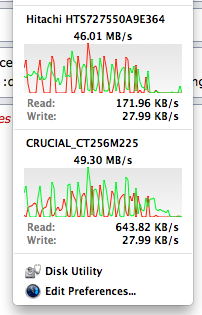 Finally, interesting point, the copies management is not done at the file level but at the level of the Core Storage blocks. Basically, it means that if you are working on a database stored in a single large file, and if you often access to certain parts only, the parts in question will be copied to the SSD. And incidentally, it is independent of the file system used on the volume.

It is a bit special, as Apple said : you can only create two partitions on the Fusion Drive, and the second is automatically on the hard disk only.

In my case, I have a Fusion Drive 750 GB (256 GB + 500 GB approximatively) and Disk Utility shows only the hard drive on the partition, with about 32 GB reserved for Drive fusion itself. Specifically, the Fusion Drive has a minimum capacity of SSD + 32GB, the hard drive partition minus 32 GB

For Windows and Boot Camp fans, you do not have the advantages of Fusion Drive…