How I connected the PowerBop to the Internet

If you follow me on Twitter, you saw that I (finally) got a PowerBop and even connected it to the Internet. What is a Powerbop ? A computer proposed by Apple and France Telecom in the 90’s : I talked about it here, it was a device that could connect to the France Telecom BiBop network.
En français.

The BiBop network was one of the first mobile phone network in the early 90’s. Launched in Paris, Strasbourg and Lille, the network consisted in a set of base stations, with limited scope, placed in the streets. To make it simple, the Bibop network was pretty close to the DECT technology : we had to manually register on a public base station and you could make and receive calls when you were close to the base station. The transition from one base station to another was not planned and the base stations locations were indicated by stickers on light poles or on buildings. In Paris, you can still find the stickers in question, even if the network no longer exists. 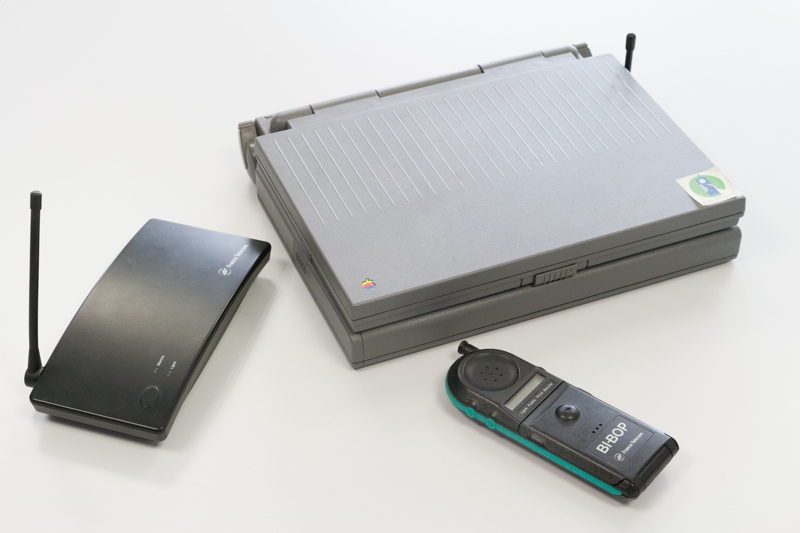 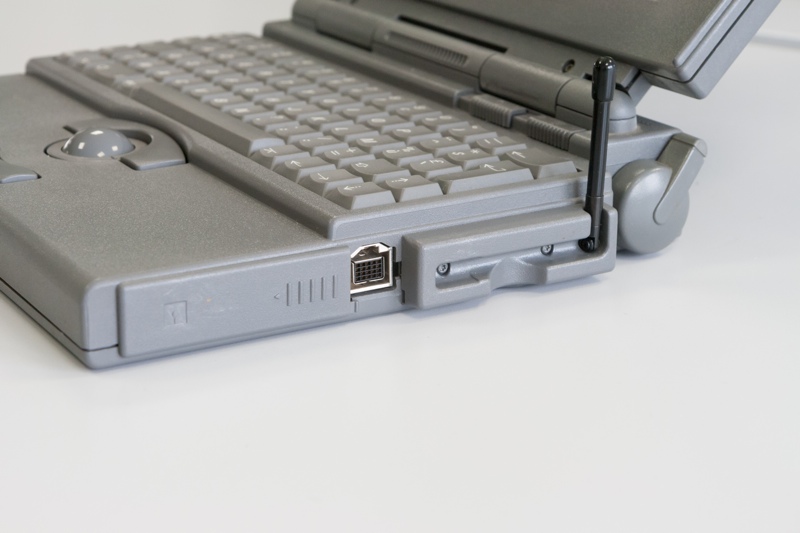 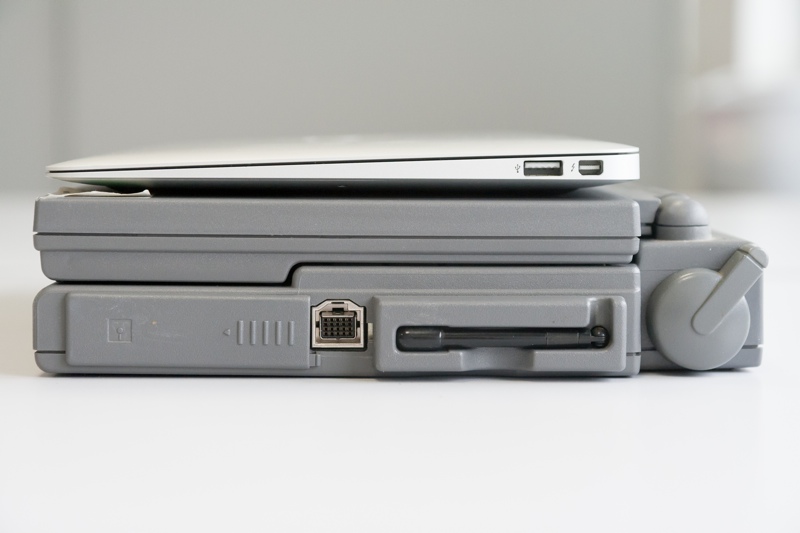 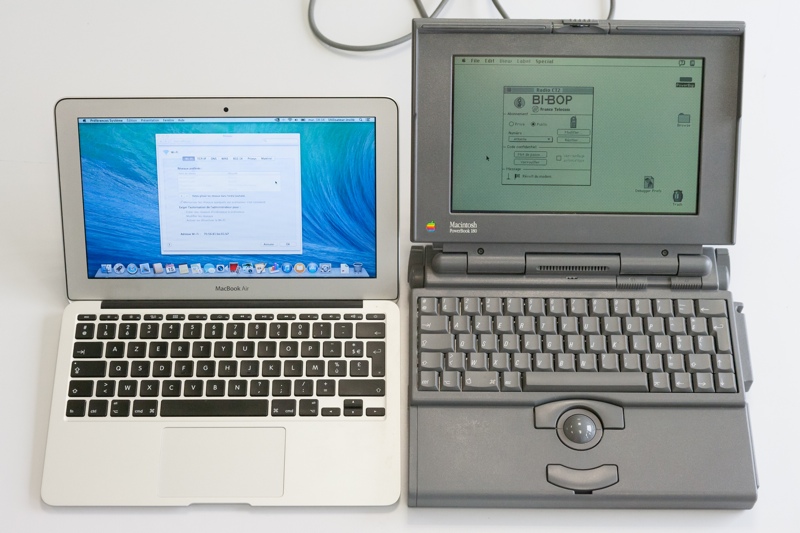 With a MacBook Air

Connecting the PowerBop was a struggle. First, I had to reinstall it. Between the data backup and the discs hunt, I had a hard time. And when I finally got a ready-to-go machine, I realized that my base station was not working. I could connect the PowerBop (or a BiBop phone) on it but not get a dial tone.

So I had to find a second (functional) base station before I realized … that the modem had obviously toasted. Indeed, my PowerBop BiBop module had stopped operating during testing. So I found a second PowerBop that worked before I realized that the hard drive of my model was dead. It was (audibly) suffering for the first test, he died during the latter. Fortunately, I had a hard drive in stock, so I reinstalled the machine a second time, accompanied by the gentle sound of floppy. 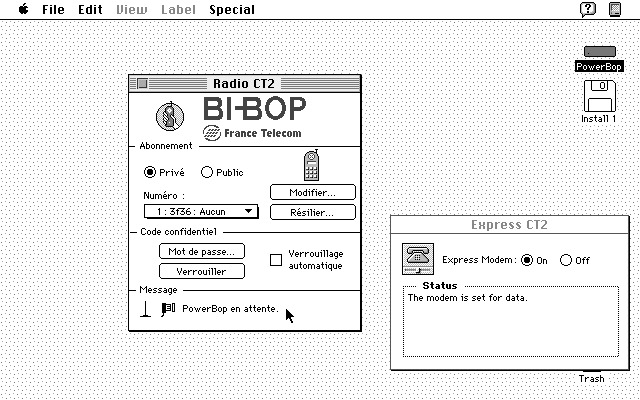 Second step, connect it to the Internet. Generally, I use a line simulator with either an AirPort modem or a Raspberry Pi, but in this case, it was impossible. The connection is not made with the PowerBop module, and I could not find a good reason fot it. It works with an external ExpressModem, but it does not with a PowerBop module. Minor annoyance, the sound of the modem is extremely loud : the PowerBop uses an external ExpressModem (a modem managed partially by the Mac software) and the AT commands to mute the sound do not work. My friend, my neighbors (and later my colleagues) may have cursed me.

So I went on a real line, with a conventional FAI and it worked. 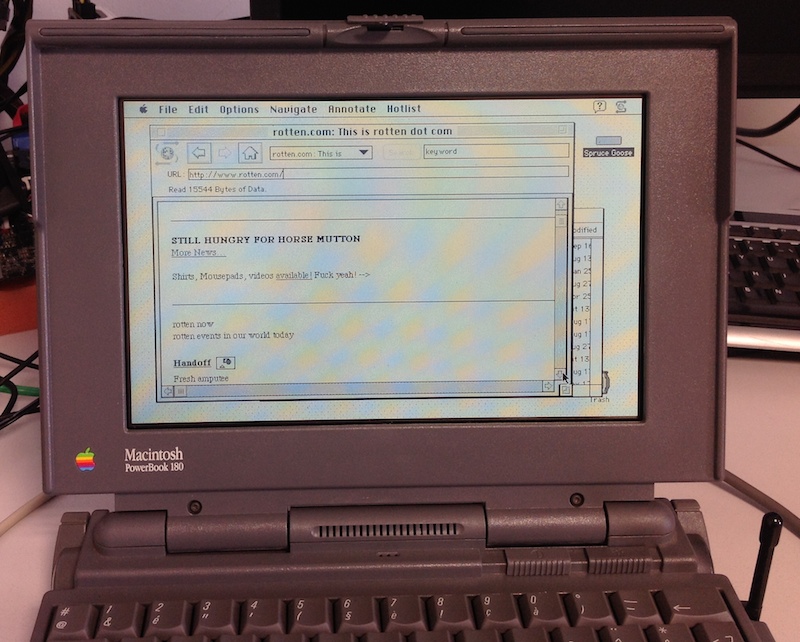 Next, there is the issue of the browser. Browsers for old systems are indeed unable to load recent pages, filled with Javascript, non-supported images with redirects that do not work. So I used a disreputable but working website : rotten.com.

The connection is made at 9600 baud (just over 1 kB/s), although in theory it should reach 14400 baud. I also have struggled badly to configure Mac PPP, since the modem initialization string are not added automatically, I had to try several strings before finding the right one for this type of modem.

In fact, it’s slow, it’s compatible with nothing … but I did it.

Oddly enough, the Genius looked at me funny when I came to explain that I could not connect… 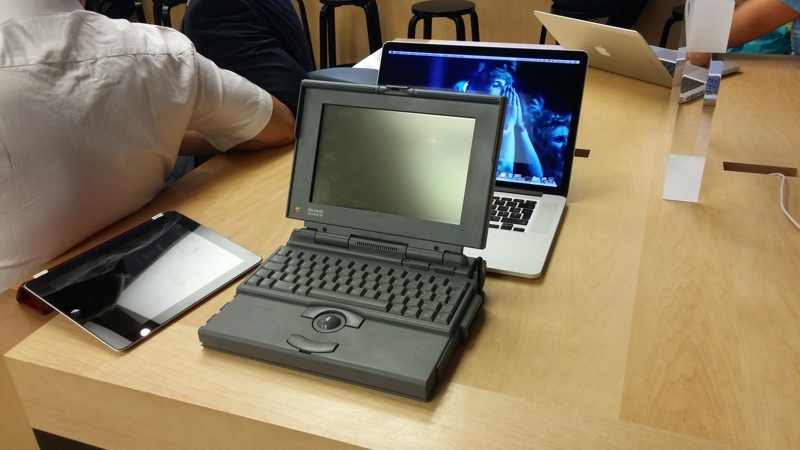