Did you know that not-so-long ago, it was possible to turn an Atari ST into a Macintosh? With the help of a fellow fan of Atari (Brume on the Atari-Forum), we restarted a Spectre GCR.
En français.

The Spectre GCR is an expansion card for Atari computers which – coupled with a dedicated software – emulates a Macintosh Plus. Emulate is not the right word since the Atari and the Macintosh used the same type of processors (68000) at that time, but the idea is there: we will start the Macintosh operating system on an Atari.

For legal (and practical) reasons, a Macintosh ROM has to be inserted in the Spectre GCR card. One of the advantages of the card (which was not on the previous version) is that it can handle Macintosh floppies that use a GCR coding, which explains the name of the card. To simplify, Apple drives have a variable rotation speed and sectors that have a fixed physical size, while the conventional players (PC, Atari, etc.) have a fixed rotation speed and variable physical sector size. The Spectre GCR card will control the Atari player (via a cable) in order to make it accept Apple floppies. 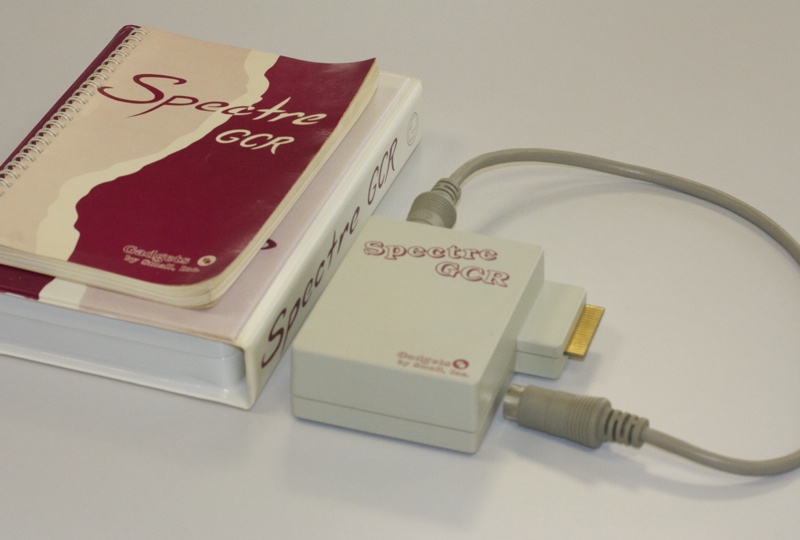 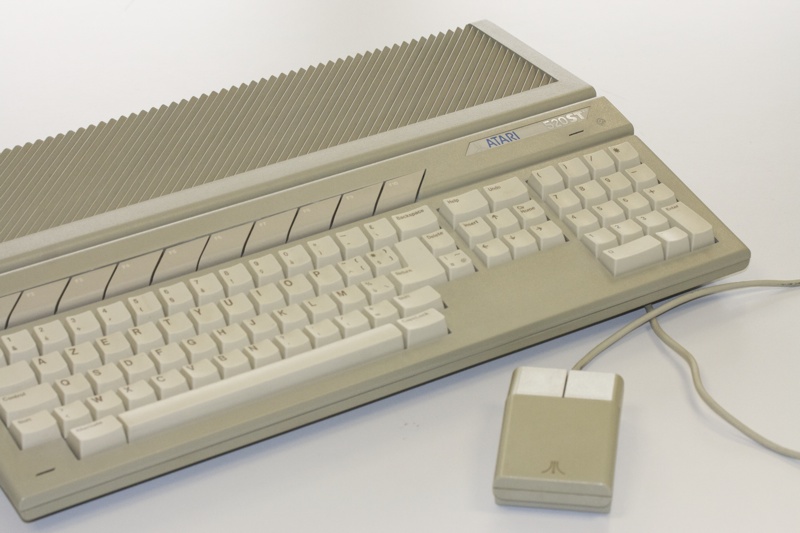 The problem of the floppies

First thing to know, the Atari only reads double density disks (the 800 kB of the old Mac). This is a concern for transferring data, for several reasons. The first one is that the DD disks are rare in 2014, so you have to edit HD disks of 1.44 MB. The second one is that to read a DD floppy… You need a compatible player. Bad news, USB drives are limited to HD disks. Finally, Mac OS X can only read the classic HFS in its recent versions.

More specifically, the most effective way to create a set of installation disks for the Spectre GCR is to use a Mac that can connect to the Internet (Apple offers images of a lot of stuff) and equipped with an internal floppy drive, but I do not have one. The solution was to download the data on a newer machine, transfer it to an old Mac (via USB) with a Mac OS X able to write HFS disks, then to copy the images (800 kB) on a 1.44 MB floppy, plug it into a (very) old Mac with an internal drive and finally write data on 800 kB disks. I won’t talk about the issues of software to write the images (thank you ResEdit).

We first tested the System 6.08 floppies. It works once you’ve read the (very funny) manual. Concerning the installation on the hard drive, it also works with an external hard drive. We used a hard drive emulator on SD cards, but I’ve read somewhere that it also went well with a Macintosh hard drive via SCSI/ACSI adapter (Atari interface). It normally works with any version of the system up to the sixth (except the very first system). The System 7 does not work and we need to find images on 800 kB version. 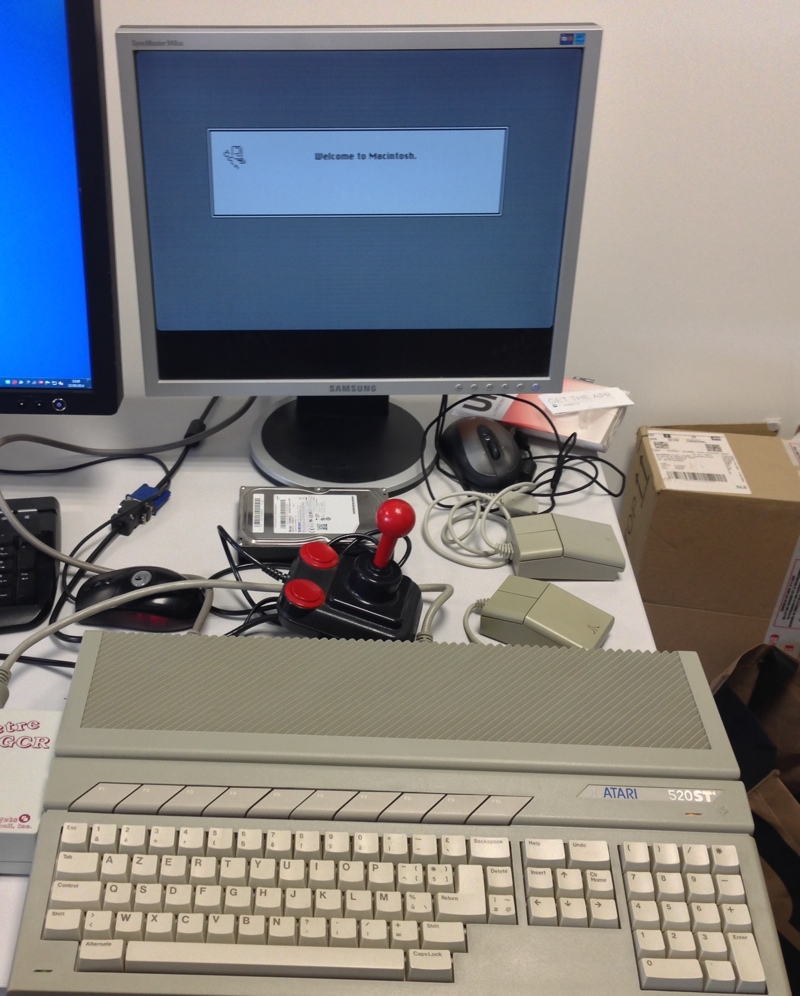 In theory, you can use printers, but I do not have any cables (and am too lazy to move my ImageWriter II).

Basically, the Spectre program disk is put on, the program is launched, the settings are defined (memory, sound, etc.), a virtual Mac is launched and the boot device is chosen (floppy, hard drive, etc.). On an Atari with 4 MB of RAM, there is approximately 3.6 MB left for the Apple system, as shown on the picture. 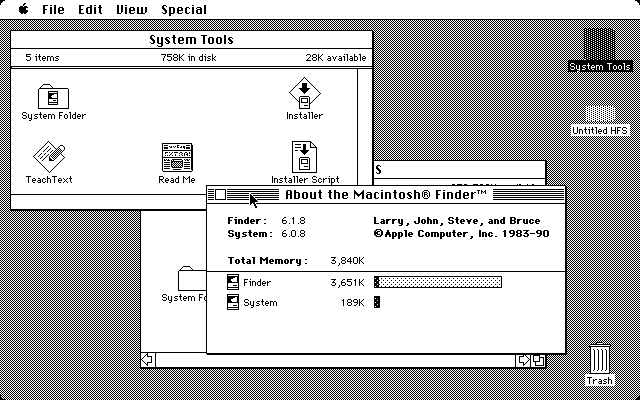 The launch on video

To test, we installed a game (Shufflepuck Café) and it works perfectly, as fluid as on a real Mac.

Next, the manual states that not everything works. Typically, the programs that use the ToolBox (roughly the standardized API) work, those who directly attack the processor or memory do not. As shown on the picture, you can even crash the virtual Mac. 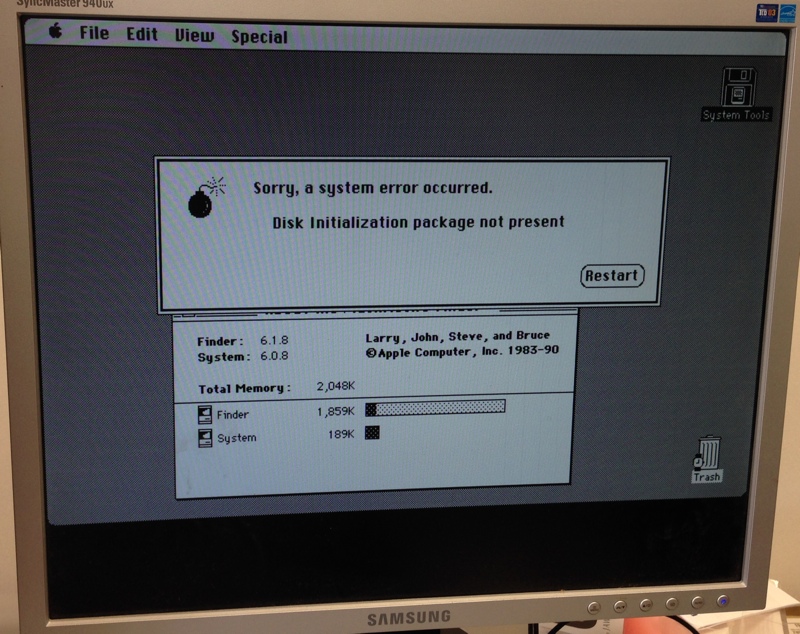 Overall it was a funny experience. And at that time, it was interesting : the Atari TT030 with the Spectre GCR card was faster than a Macintosh II, for example, even if the 68030 was not used to its full potential.